Hiding in the abandoned bog city of Sheljar The Five found an home. The once thriving inn is a rare building within the fogs that is in a decent state of repair. As Behn and Ixnyx scouted the city square the others remained on their new tiny island. 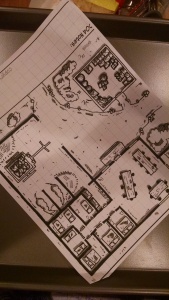 This section took places away from table

We return to table play.

When the gobkon and Sorcerer return from their trip they are short the mulkon. They speak of an encounter with some dire beast that trips creatures and tosses them into its gaping maw. It is also the source of the Stench of Sheljar. The two do not know if there are more of this bog kraken.

Wounded and needing to heal, Mo recognizes the description of the holes from those whipping tentacles and leads the group down to where he scouted. But on the way along the eastern path Barkley barks at the river. Then Mitzie joins in as well. Floating down in the chill water, at night is some kind of man. A large heron is circling above. That bond clearly still active.

The two dogs jump into the water on command. Their attempts to drag the man to shore fail, but they do slow him down. Aamar sprints ahead and uses his thorn whip to pull the poor soul to shore. That action and the dogs get the man into the dock area.

Aamar uses a full vial of the Everflow to help the hapless soldier of Kirtin. Saffron having recognized the insignia on the light infantryman. Later, she escorts him back to the inn. Ixnyx had already turned one table into a work bench. She was working on some promised alarm system for the bridges. So Saffron took Ajhenas to one of the bedrooms to heal. They also discussed Kirtin, his presence in Sheljar and a certain volcano.

Mo leads Behn, Samul and Aamar down to the pockmarked land. It is immediately familiar to the Sorcerer of Gate. He again speaks to how he won that previous encounter, with Ixnyx and the mulkon doing a bit themselves.

A watch is established when the return. Ixnyx, Behn and the new arrival Ajhenas allowed to heal.

In the morning Ixnyx declares that she needs to install those alarms, and even has a messenger flitter ready for Saffron. This small device will return to a single location with a short message. That location is the fireplace mantel in the inn.

Saffron suggests the group head through the thicker fogs to the east. She wants to avoid that dangerous beast, maybe finding a new path to the city square. It takes two trips in the rowboat to get everyone across. They explore an island market, mostly failed and decaying. The fog is so thick they cannot see too far, but both the Rogue and Behn see Samul pocket a bar of silver.

Heading to the northeast edge of the island there is a huge dockyard. No boats are left, but this is a place where great ships came to Sheljar. There is also a bridge that rapidly rises from the land, heading towards the city square. It ends in an abrupt slice through the stone. On the edge of vision they see the other part of the partitioned bridge.

Saffron and Aamar want to take the rowboat across. Samul and Mo think there is a way between the Barbarian’s great strength and the Rogue’s quick feet they can build a bridge. Behn points out that their dogs couldn’t cross such a rope-bridge. Ajhenas is stuck chuckling as this group that has just accepted him argues.

Done with words the Bard and Cleric of Quar head back to the row boat. Samul is offering to tie a rope to Maurice and just throw him across the gap. But then little Mo sprints up the bridge leaps the gap. The tiny halfling from Ooshar tumbles to his feet with a little flourish. Then he ties off the rope. Samul comes across the rope bridge while Behn rides Mitzie to let the fans of more traditional transportation know what happened.

Now on the island square Behn “leads.” He isn’t in front of the group, but he is describing the things they see. Across the square is the Temple. The group decides to edge around it, but to the right of the open doors is a cemetery. The grounds and graves broken open. The group avoids that and instead goes straight to the steps.

Two gargoyles swoop upon them. Aamar and Samul do most of the work to take them out. All aided them, but the two were the primary targets of the living stone. A bit shaken, a bit weary the pit fighter enters the vestibule through the open doors. Between the nave and vestibule is another set of doors.

A bit naive the Mehmd native flings the doors open and the ceiling gives way. Behn, Mitzie, Aamar, Bernie and Samul survive the crush of stone and wood. Little Boo, Samul’s lizard, is smashed. Aamar’s spells cannot help the little bearded dragon, but they do heal Mitzie and Bernie.

Now, the group proceeds with caution. Mo checks the door. He looks into the nave, and it is occupied, but nothing is moving. There are no more traps, just 16 skeletal heads staring towards the altar.

They enter. Mo again looks for traps in the nave. He finds none, though there are two doors on either side of the altar behind the lectern. As the group fans out none of the skeletons react. There are five more smaller ones, that look like the face of Ixnyx. The larger ones a mix of human and those hobkon that captured their ally.

Frightened that the undead could rise at any moment in a Obscon temple guarded by traps The Five ponder their next move.