Updating progress for The Five has been difficult for a bit. This shall sum up their activities over the last four sessions. Mansaray is still somewhere in the Western Wildes as his falcon is stays close to Aamar. Shonie stayed in Telse and works to provide some information to her companions via messenger pigeon to the caravansary.

Saffron and Aamar arrived at the caravansary on the scheduled date. Maurice stayed in Fort Ooshar a day longer and discovered that his father’s old friend Willan’s children are part of local gang of thieves that have been ordered to follow him. At last check Willan may, or may not, be in Qin along the Southern River. Mo then slips out of Ooshar and catches up to his companions.

At the caravansary The Five (Aamar, Behn, Maurice, Saffron, Samul) head off to Sheljar, and the supposed safety from harm that a place that is either haunted or cursed offers. Along the way there they happen upon a broken repeating crossbow the size of a siege weapon and some marks of a scuffle. This reminds Behn and Samul of their previous conflict so the group heads down the gully.

Working along the path the group finds that it runs up a gully. As they walk this gully the find tracks of a subject that was drug back along the “path.” As they head down they are ambushed by two more giant, tusked humanoids with those immense crossbows. Those two slow the group, but are not a significant threat.

Continuing up the path they notice an encampment with two defensive positions, a few tents, a cave at the far end, a giant thing tied to a stake and a tiny mouthed halfing inside a cage. This is now a rescue operation. The group hates slavers. It doesn’t matter that these are not Kin being kept.

Through a combination of flanking, frontal assault and luck The Five manage to stay alive despite large numbers of opponents. There are three different sizes and two genders they fight. A few run back to the cave and block the entry, leaving the two captives to The Five.

Ixnyx is a goblin. She was held in the cage and works as the translator for herself and the mulkon. Both agree to work with The Five in the near term, as they are now free due to their help. Though a few of the rebel goblins remain unadressed, Isnyx agrees that hiding within Sheljar will prevent other powers from following The Five, because no one would be insane enough to enter this cursed city.

Everyone returns to the caravansary for a brief reloading of consumables, and they head back out on the path to Sheljar. Now seven strong (3 halfings, 2 humans, 1 gobkon, 1 mulkon) with several animal companions they enter the deep fogs that have surrounded the former empire. There is no stench, but there is this thick fog and apprehension.

As they descend toward the bog-city the fogs get thicker, the definition between river and decaying city disappears. But there is a clear entry from the Sheljar Road into the city proper. It is a wide and kept bridge. The span crosses a formal moat of brackish water.

Samul and the mulkon lead the way. The mulkon makes Samul look small. Samul is well over six feet and has a pit fighter’s muscles. A few dozen feet onto the bridge two helmed horrors with their reddish eyes trapped inside a blackened armor that screams death fly into their path. It takes some time, with Ixnyx and Maurice jumping into the water to hide, getting off shots, some of Ixnyx bolts are on fire.

After the horrors are defeated the group knows they will need a sanctuary to establish as a home while in Sheljar. These kinds of creatures, plus the two goblins talking about undead walking at night and a mysterious stench that swallows the Kon, mean fear rules. But, Ixnyx knows there is a square where the airxips landed. It has a library and a temple. They are well defended, but could contain either the power that rules Sheljar (Xelgar) or a Lorebook. 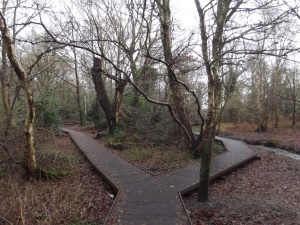 They all head off to the northeast. It is a wandering path through dry land, some fords, some bridges, some walkways. Everything is in disrepair. The stone bridges can hardly hold the mulkon. The fords mean walking through a water where bones rest at night. These bones are of Kin, of Kon, of beasts.

Death is everywhere. They continue walking until there is a stench along another bridge to the northeast, where Ixnyx says his expeditionary flight landed, and later fled. But that stench is a cue. If they continue along that path someone, probably everyone, will die.

The next most direct route is a wooden bridge to the north, except that odor is there as well. As a group they’ll need to find a longer route to the city center. Down to the southwest they find a rickety bridge leading to away from the stench. They cannot see the land where it ends due to the fog, but it is the only path that does not include death. They take it.

After a walk through the deep fog, and a few broken planks, The Five arrive at a place that used to be an inn. It has has a small dock off the common room, place for a animal companions, a storage room that currently hosts a family of rats, but has a decent roof to use as a lookout. Plus there aren’t any piles of bones or old cemeteries on this patch of land. It’s old orchard and garden is currently feral, but may have some food that they can use.

Samul declares this the capital of his kingdom, which brings some surprisingly good humor to the group. They start to create defensive positions. Behn volunteers himself and the two goblins to head out on a scouting mission along the only other bridge. They do take the rowboat, but follow that bridge.

On deadline, hoping to return to the soon-to-be sanctuary prior to sunset they find their way to the city center, which is a triangular space where most of Ixnyx flight landed. The open square fit the main ship and two of the tenders. Another landed off to the northwest. Three buildings flank the area – a library, a temple and a government office. Ixnyx lets Behn know that expedition never got past the entries of the library or temple due to the amount of skeletons and zombies there. They did clear the office of government before the fleet fled the volcano.

Behn targets the temple for their first visit. They have about an hour before they must return to safety, they hope it is safety. Ixnyx has the mulkon picking up some of the remains of Ixkon’s fleet’s visit. She thinks they can build a couple messenger devices, as well as convert more crossbows to the repeating style she thinks is standard.

As Behn and Ixnyx approach the temple two gargoyles swoop down attempting to prevent entry. It’s a tough contest, but with the advice from Ixnyx Behn is able to fight well. A few well placed spells and the fiery bolts from Ixnyx’ crossbow take down the animated statuaries.

Shortly after the gargoyles are destroyed the mulkon comes running “the stench is coming.”

A small tendril of thing shoots out of the ground whips at the mulkon’s legs, tripping the large fighter. A gaping maw shoots up from the ground a few dozen feet away from Ixnyx and Behn. Small tendrils reaching to the sky. Two larger ones flank the many-toothed mouth slapping the ground nearby with a thwack-thwack beat.

Ixnyx fires a fire-bolt at its mouth-body. Behn leaps on Mitzie to ride the dog, hoping that rapid movement will keep the two safe, or at least together. Eventually the sorcerer locks onto the flaying beast with his witch bolts. Mitzie leaps a few of the whipping tendrils, while the mulkon shoots the mouth with its huge spear sized crossbow bolts and they try to stand up, getting immediately tripped back to the ground.

One of those slappy tentacles trips Mitzie, but the halfing is able to concentrate on his target. Mitzie does not get grappled. The mouth of this dire creature opens and vomits bones at the mulkon. This spew of former victims rips and slams into the poor fighter.

The fight seems a bit repetitive, until the mulkon is incapable of moving. Somehow the bog beast’s little appendages grasp the 9+ feet of muscle, bone and tusk, tossing it into the air towards the gaping mouth. That many-toothed mouth closes on the mulkon, who is swallowed.

Behn, Mitzie and Ixnyx survive the fearsome creature, who on death causes many dozen of tiny tendrils to pop out of the ground and the chewed remains of the mulkon can be seen in the maw, among the teeth.

The group flees, before some noxious cloud can come and to avoid the walking death of night in Sheljar. They return via rowboat to the old inn. Their hearts full of fear, disgust and some sorrow.