The loss of Boo still haunts the group as they consider their next move in the audience of a few dozen decomposed bodies. The skeletal remains of a congregation loom over the party, their open eyesockets unmoving but seemingly following each nervous tic, every sideways glance.

Session Notes:
The player running Ajhenas wrote this recap. This is the first recap written from a single player’s angle and thereby gives new insights into the story.
Samul and Maurice are absent from the session, but they remain in the temple nave. Maurice also helps open a lock.
Shonie is still in Telse, they think.
Mansaray’s whereabouts are unknown. His falcon is back with Ixnyx.
Ixnyx is back at the inn setting some alarms.

Given the disastrous, carefree door opening of Samul only moments prior, it is instead the recently revived Ajhenas who is entrusted with opening the doors of the temple. The Kirtin man still hasn’t fully recovered from the severe head injury that left him floating alone miles downriver. Silently he curses himself for not sensing the earlier trap that left much of the party injured. After due diligence, Ajhenas opens the left door into a back room, with Aamar, Behn and Saffron close behind. Injured and traumatized, Maurice and Samul wait in the rubble. Ajhenas’ heron remains outside on watch. Mitzie, Edgar and Barkley stay with the barbarian and rogue. If the skeletons animate the halfing and human will have some help.

Beyond the door the party finds a simple set of rooms and a pair of staircases. In one room lies a table with a set of unfamiliar books; Behn notes that the books have been disturbed recently. As much of the party examines the mundane items scattered about, Ajhenas goes to a window to look more closely at the side of the church farthest from where they entered.

To his astonishment, the thick fog that hindered their progress earlier appears to have completely lifted in the direct vicinity of the church, allowing him to see outside. There, ten yards out from the church, is a lone pole with a pennant hanging from the very top. A gruff word calls the others to the window, where no one is able to recognize the peculiar symbol adorning the flag. Behn takes note of it for later. 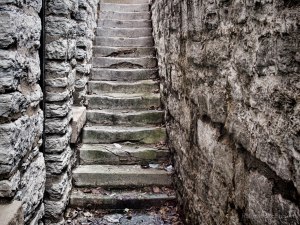 By Randy McRoberts at https://flic.kr/p/oGzdYG

Having seemingly seen all that is there to be seen, the party considers the stairs and decides to travel downwards first. Their descent leads them into pure darkness, greeted only with a nasty stench not unlike a sewer. Saffron and Ajhenas light torches in an attempt to make sense of the room, but to no avail. It simply isn’t worth the risk, and an exploration of the basement is abandoned.

That leaves only the upwards stairs. At the top, nothing greets them save for a few more books with more strange symbols, and two more doors facing towards the back of the building. Behn presses his ear against the right-most door, and hears nothing living. Ajhenas is wary nonetheless, and opens the door with an axe at the ready. And sure enough, upon opening the great wooden wall, a wight blows by him to attack the rest of the party. In a moment of weakness, Ajhenas attempts to bring one of his trusty handaxes down on the nasty ghoul only to get it stuck in the doorframe. An encounter with the other leaves him badly wounded as a rusty sword slashes his chest.

Behn and Aamar have similarly poor luck despite seemingly excellent preparation. An attempt to disarm the opponent leaves both Behn and this new enemy without weapons.

Bernie, Aamar’s bear cub, rushes forth swiping at the wight attacking Behn. Saffron stands back in support. The fellow Kirtin-ite drumming inspiring beats, with secondary rhythm that place that same wight at a disadvantage.

Calling upon his long military career, Ajhenas attempts to isolate this armed creature from the rest of the party. The cut he sustained was deep, and the man has seen how man and beast alike fare with such wounds. His shield equipped, Ajhenas pushes his attacker deeper into the room from which it came, blocking the door with his body. He attempts to push it closed behind him, but fails; a most fortuitous fail.

In the other room, the party appears to have the wight in hand. A series of swipes and spells leave it all but defeated. Behn considers finishing it off, when out of the corner of his eye he sees the struggling Ajhenas alone, staggering with his shield high. Behn calls on one of his most powerful spells (I silently pray for good aim) and fires a bolt over the shoulder of the Kirtin man into the face of the looming creature. The wight lets out a horrific scream, barely clinging to the world of the living. Everybody looks on, anticipating that Ajhenas will run his longsword through the blight and earn his bravery.

But the man is too weak, a lumbering strike misses wide and his body is left open to a critical strike, which falls swiftly after. Ajhenas crumples to the ground, wondering if this is the day he dies, surrounded by foreigners in a foreign land for a cause he doesn’t fully understand. He thinks of his blacksmith parents, of his bonded bird, the halls of the academy and of the many mountains he will never traverse. It’s only when he feels the healing salves on his lips that he realizes just how overly dramatic he was being.

Helped to his feet, Ajhenas sees the smoking remains of the two vestiges of death. The man is not one who speaks, but Behn earned a few words of gratitude. Also to Saffron and Aamar, for their generous use of healing Everflow.

By now the light struggled to survive through the island’s fog. The party checks the accompanying door, which was gratefully empty. Ignoring the remaining upwards steps the party returns to the first floor, where Behln stops just before the party reunites with Samul and Maurice. He reminds the group of the  pennant flying outside and how it appeared to repel the fog. After some discussion, Behl bursts through a window and (with help) retrieves the cloth. As soon as he does though, the fog that was held back as if by a glass bowl flows back into the empty space, and a sense of dread envelops the group along with the thick air. Replacing the pennant does nothing. Ajhenas calls for Laurel, who through speaking with Aamar informs them that a green cloud is approaching from that side of the building (and also that it’d be a very good time to leave.)

The group reunites in the main chamber, ready to pack up and go. But the skeletons still sit in their pews, waiting for the sermon that will seemingly never come. Tired, wounded and annoyed, Ajhenas calls for the whole damn building to be burned down. But that idea doesn’t fly. Instead, Aamar sends the others on and lets forth a powerful spell from the center of the room which thunderously shatters the remaining bones.

From there it’s a race to get off the island, away from the now apparent green cloud, and to the party’s base of operations. But as they cross the long bridges that connect the haunted village to the mainland, a bell rings in front of them. Ajhenas mentally braces himself for another fight, particularly when a goblin approaches excitedly. It’s all the party can do to keep him from throwing an axe at the monster. It makes the coming introductions between hottie Kirtin outsider and former captive turned Five member Ixnyx rather awkward.

The green fog approaches no further, the group returns to the inn and the party settles down for rest at last.

One thought on “Group 1, Session 17: Ajhenas in the temple”