The Lorebook Hunters decide that before they head south to Qin (where they suspect two Lorebooks to be) they shall eliminate Parun. Parun, as an ambassador from Azsel, has established an exclave of the slaving empire. A halfling ranger with a whip of wounding he either has a Lorebook (Enchantment/Charm?) or is a high level follower of someone who does. There is a complication, as the Proctors of Grace seem to be able to home in on those that hold Lorebooks or are imbued with magic.

Session Notes:
Samul, Saffron Behn, Doceo, Aamar were present in at least one session as active PCs.
Mansaray, Mo, and Ixnyx stay at the airxip.
The remaining characters are in Sheljar. Ajhenas and Kuda are on the Tower Island creating a military, while Telley is on the settled island with the Temple of Wisdom (where the goblins hid) helping the people make a life there.  Braaz, and Els are working on restoring the two homes on the south end of the Island Inn.
Shonie is retired and remains in Telse.

Floating in the Airxip Toxić above the North River the group is searching for indications that Parun or a large camp is nearby. They stop outside of Frostfall.

Frostfall is a town of about 45 buildings inside a wall with a tow-rope ferry across towards the Western Slope. The ferry ends at the Doghorn family homestead and two other buildings. Frostfall also has an interior wall with a half-dozen homes on Maple Leaf Hill.

Thornton (Doghorn) is the Ferry hand, Juliana is his sister. Their mother operates on the town-side of the ferry. She is Isolda. Through a heavy stutter Thornton suggests that they visit his friend Aitne’s (Dustbeard) family shoppe. At the shoppe it is the goliath Grups Harpyja Stormchaser that provides the necessary intelligence about the nearby slavers.

Samul hides along the path waiting for Parun’s followers to come. Saffron is disguised as a wondering Azsel-ite. Behn and Aamar are to join the fight if necessary. They free two goliaths who are too fearful to return to the abandoned village that Parun is using as his latest base. Two Azsel monks are eliminated.

Doceo, back at the airxip in the hills above Frostfall, notices a flight of dragons approaching. Upon conversing with Fierbas the ale drake he learns that the flight contains two scouts, two evokers and a captain. Doceo decides to rush into Frostfall in an attempt to warn the advance party.

Doceo rushes to the group, showing up just after the fight. Samul escorts the two goliaths back to Frostfall so that they can prepare a defense of the village. It is possible that the scouting group of the Proctors threaten the poor community. The former Mehmd pit fighter convinces the commoners of Frostfall to ally with New Sheljar. A wyvern skull pouch with an undead ripper lizard is rather convincing of the power of New Sheljar.

The first fight is an encounter with two dwarven spies and their wyvern mounts. This drains significant resources, and results in Doceo being poisoned. It takes Aamar an hour to form a healing salve. He also manages to convince a herd of elk, lead by a single giant elk, to join them.

Which means that when they get to Parun’s camp there is a massive battle. On one side is an adult black dragon and two elven evokers. They occupy a tower on the NW corner of the ruins. The battlefield in front of them is littered with Azsel halflings and their companion dogs. Some are alive, many are dead. Across a small stream is Parun and two wyverns, likely the evoker mounts.

Behn sneaks into the ruins to free the enslaved animal companions. Doceo rescues a couple dozen enslaved goliaths with a few humans and halflings. Aamar and Saffron try to take out Parun.

They use the cover of a stampeding herd of elk to advance on the skirmish. Eventually Saffron places her Crown of Forgetfullness on Parun. Aamar and Saffron take fire from the Evokers. Eventually the party of four assemble near Parun. The Proctors and the Lorebook Hunters take out the slaver, but the Proctors also take out Saffron.

The party decides to retreat, as do the Proctors. Neither side is confident of victory. The heroes take Parun’s body and flee to Frostfall. They are accompanied by the former slaves. It is unlikely any of the other Azsel forces survived the numerous spells and breath weapons that further destroy the city. 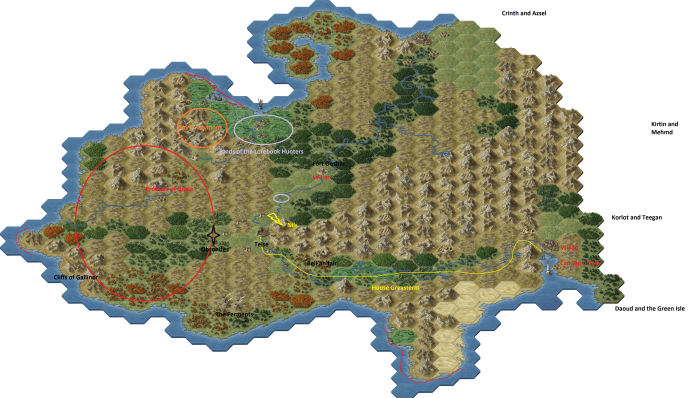 Based on the fight, they adjust their maps of known adversaries. The Western Wildes do not hold safety for the group, except possibly in Sheljar and Frostfall.

Become a Patron to see fiction set in the World of the Everflow. These stories are set in the time of the Awakening.