You do everything in your power to free the kept. These rogues operate outside of the rules of society and follow their own path to freedom for themselves and others. They combine the artful skills of a thief with the directed violence of a blade. As the Liberator gains power they are able to sense who needs their help. You are able to aid in their defense, grant them freedom from captivating and punish the captors.

Within the World of the Everflow the people of Azsel place a higher price on Liberators than they do on escaped slaves. 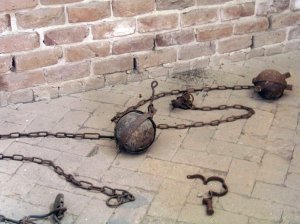 by Jon Dawson at https://flic.kr/p/7VzjUd

3rd level – Hard to Contain – The Liberator’s desire and expertise at freeing others is grants the Liberator advantage on checks against Grappling and breaking out of a net. When whipped a Liberator can ignore the pull effect.

9th level – Defend the Defenseless – As a bonus action you can aid in the defense of one ally who is not attacking. They may take other actions, but not spell attacks. Until your next turn that ally is attacked with disadvantage as long as the Liberator and ally are within reach (5′, or 10′ with a reach weapon). This ability can be used to defend an attacking ally but then requires the use of an action rather than bonus action.

9th level – Free the Oppressed – the Liberator gains an Extra Attack and the choice of Dueling or Defense Fighting Styles. Sneak Attack now also applies to any enemy that the Liberator learns has taken or kept a slave within the past 24 hours.

13th level – Hand of Freedom – The Liberator learns Mage Hand or Prestidigitation if Mage Hand is already known. They can use this cantrip as an Arcane Trickster of same level would. If the Liberator has a bonded companion they can use the cantrip through the companion as long as the companion is within sight. A bonded companion is similar to a Ranger Companion. The rule structure is unique to the World of the Everflow. If the Liberator has a Familiar or Companion per standard rules this ability can still be used.

13th Level – Remove Brand – The Liberator learns Minor Illusion and can cast a version of this cantrip so that a branding or other ownership mark is hidden until your next long rest. No concentration is required. It can be discovered through an Investigation check per the Minor Illusion rules. This brands and other ownership marks can be on people of kin, bonded companions, domestic animals or identifying ownership crests on vehicles. It can be cast per the standard cantrip rules per the setting. A Liberator generally uses this so that hired slavers and others can not identify the freed peoples, though some use it to steal cattle or hide the fact that their bond is bonded.

17th level – Blade of Freedom – the Liberator gains a second Extra Attack and the other of Dueling or Defense Fighting Styles.

17th level – Find the Oppressed – You gain advantage on Investigation and Intimidation. You gain proficiency in either skill if unknown. If already known you gain expertise in those skills. The Liberator can detect the direction and travel time towards the nearest place where more three intelligent creatures are held captive, under influence of fear or charm or a slave market. This only works for the closest of those scenarios and has a range of 2 times the combined total of Wisdom score and level miles. The ability recharges with either a short or long rest.